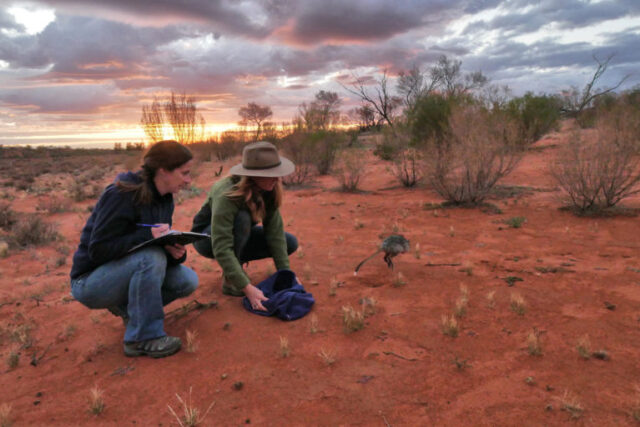 Invasive predators, like cats and foxes, have wreaked havoc on native species across Australia, leading conservationists to build fenced-in havens.

But now researchers are finding that some animals in these havens have lost all fear not only of invasive predators but native ones as well.

To combat this, researchers are trying a new strategy: release a few predators back into these havens to select for predator-savvy animals to aid long-term species conservation.

Early efforts to date have shown some success, but scientists say much longer studies are needed.

In the cool of the desert night, the small gray-furred creature emerges from the safety of its burrow in search of food. The bilby (Macrotis lagotis) has a surprising combination of features: its ears are large and rabbit-like, but hairless, its snout is pointy and pink-tipped, and its characteristically marsupial pouch holds between one and three baby bilbies, or joeys. Conservationists have protected bilbies in conservation havens designed to keep invasive predators out, but now some scientists say it’s time to start letting a few of those predators back in.

“If we’re going to ever reestablish these animals [in the wild], they need to be aware of predators and they need to have improved predator awareness traits,” says conservation ecologist Katherine Moseby, an assistant professor at the University of New South Wales in Sydney.

The bilby, also known as the greater bilby, used to inhabit around 70% of Australia but, like many other Australian species — and many species the world over — their numbers have plummeted because of invasive predators.

Invasive predators are a major threat to biodiversity; they’re thought to be responsible for more than half of all known bird, mammal and reptile extinctions. Indeed, the bilby’s closest relative, the lesser bilby (Macrotis leucura) was wiped out of existence in the mid-20th century, an extinction that’s been attributed in part to the introduction of cats and foxes. To save native species, conservationists in places like Australia, New Zealand and Hawai‘i scrambled to create predator-free zones for these rapidly declining populations, including the greater bilby, enclosing swaths of land with predator-exclusion fences or relocating species to tiny, predator-free islands.

In the short term, these so-called conservation havens have been extremely successful: they’ve prevented the extinctions of many truly wonderful animals, including a chubby green-feathered but flightless parrot called the kākāpō (Strigops habroptilus) and the pint-sized rufous hare-wallaby (Lagorchestes hirsutus), and, of course, have protected insurance populations of the surviving bilby.

But Moseby says that conservation havens are “really a short-term solution, a band-aid solution.”

Wild species shouldn’t be confined to such havens indefinitely, according to Moseby, and indeed, an unexpected quirk of evolution means that the conservation havens could be undermining the long-term survival of the very species they’re trying to save.

No predators leads to evolutionary problems

Moseby got her first real taste of the desert when she was 19.

“I just fell in love with the open space and the big sky and the warm weather and the cool animals,” she says. “I was just drawn to the desert.” She hasn’t looked back since. She’s currently the principal scientist and co-founder of Arid Recovery, a wildlife reserve and conservation research station in South Australia.

Arid Recovery is home to some of Australia’s most vulnerable small mammals, including bilbies, western quolls (Dasyurus geoffroii), burrowing bettongs (Bettongia lesueur), and Shark Bay bandicoots (Perameles bougainville). While the reserve safeguards these vulnerable populations, Moseby says these animals can’t be confined here forever. For their conservation to be fully successful, they need to reestablish populations beyond the protective fences.

“The long-term aim of conservation is to have these free populations of animals and that is not what [conservation havens] really are,” says Christopher Jolly, an ecologist at Macquarie University in Sydney. “They’re massive, massive areas, but they pale in comparison to the size of the species distribution traditionally.”

But putting these animals back in the wild is no easy task. Because these small mammals didn’t evolve alongside foxes and cats, they often don’t recognize or respond effectively to the threat posed by these introduced predators, a phenomenon known as prey naivete.

Living in a predator-free sanctuary keeps these animals alive, but it doesn’t do anything to address prey naivete. Attempted reintroductions of these prey species outside the sanctuaries are often unsuccessful due to invasive predators and it’s unlikely that Australia will be able to completely eradicate invasive predators any time soon. (It’s estimated there are nearly 3 million feral cats in Australia, living in practically every corner of the country.)

Even worse, animals kept in sanctuaries may begin to lose their fear of native predators as well. Animals adapt to the environment that they live in: animals living in an area with predators are subject to different pressures than those living without the daily threat of being eaten. It’s perhaps unsurprising, then, that animals living in predator-free zones begin to lose their fear of predators.

What did surprise scientists was just how quickly this happens. In 2003, Australian scientists established populations of northern quolls (Dasyurus hallucatus) on two offshore islands in an attempt to protect the species. The quolls’ numbers were quickly dwindling on the mainland due to invasive cane toads, because the quolls didn’t know not to eat these highly toxic animals.

In 2016, a team of scientists including Jolly attempted to reintroduce quolls in Kakadu National Park in Australia’s Northern Territory, after training them to avoid the toxic toads. The toad-avoidance training worked, but the reintroduction failed for a completely different reason: dingoes.

After just 13 generations on the predator-free island (a quoll generation is just one year), the quolls had lost their fear of dingoes, a native predator that they co-evolved with for thousands of years. It wasn’t just experience-based either: Jolly says that captive-born quolls (with wild mainland quoll parents) that had never seen a dingo still maintained anti-dingo instincts.

So why is this happening so fast?

“We suspect the reason is that it is very costly to be avoiding a predator that doesn’t exist,” Jolly says. On the predator-free island, the quoll population expanded rapidly, resulting in fierce competition for food. In this environment, says Jolly, only the animals willing to throw caution to the wind to obtain food would have survived.

“We suspect that this is happening around Australia in these reserves, where the animals that are willing to forage against their better judgment in a highly risky scenario are actually being [evolutionarily] selected for,” Jolly says. “So, when you have strong selection against wariness and against avoiding predators that don’t exist, these traits will rapidly disappear.”

This means that in the short term, conservationists are saving these animals, but they may also be unwittingly creating an evolutionarily skewed population that will never be able to return to the wild.

Putting the predator back in

How do we fight prey naivete without destroying the species?

Some scientists have attempted to instill an appropriate fear of predators using a wide variety of techniques, such as mild electric shocks or squirt guns paired with predator scents, taxidermied predator animals, or a live predator separated from the prey animal by a fence. Moseby herself recounts past experiments that involved capturing bilbies and spraying them with cat urine in an attempt to teach these small marsupials a suitable fear of cats. While this seems to work sometimes, failure is common: Jolly’s quolls had received anti-dingo training, for example, but this didn’t seem to bring back an appropriate fear of dingoes.

Even if training is successful on an individual level, it’s not necessarily feasible at the population scale: you can’t train every animal in every new generation of the species. For a strategy like this to be successful, Jolly says, the animals would have to share this information with each other, possibly by mothers passing on appropriate anti-predator behaviors to their offspring. While this may be possible in some species, Jolly says there just isn’t any evidence that animals like quolls, which don’t seem to have especially strong social bonds, can share information like this.

Moseby has another idea: she calls it accelerated natural selection. Instead of using a stand-in for a predator (a scent cue or taxidermied version), she thinks it might be more effective to use the real thing: adding just a few predators back into the predator-free zones.

In theory, the prey animals that have characteristics that help them avoid predators — perhaps they’re more risk adverse or warier of predator scents — will have better survival odds and will pass those traits down to their offspring. Those without appropriate predator responses will be removed from the gene pool.

“Over time they should continue to improve to the point where they actually evolve into a species that has those predator avoidance capabilities,” Moseby says.

In fact, the group at Arid Recovery has seen some preliminary successes with this strategy. In 2014, researchers moved 47 bilbies and 353 burrowing bettongs (marsupials the size of a pet rabbit that look a bit like a cross between a mouse and a kangaroo) from the predator-free enclosure to a 2,600-hectare (6,400-acre) paddock that also contained five feral cats. Then they waited to see what would happen.

Over the following two years, populations of both bilbies and bettongs increased, demonstrating their ability to coexist with low densities of cats. After about three years of living with cats, these bilbies appeared to become warier: they spent more time under the cover of vegetation than bilbies still in the predator-free zone.

In 2017, researchers also released some cat-exposed and cat-naive bilbies into another large paddock with higher cat densities and monitored them over the next 40 days. Bilbies that had been exposed to cats fared better than their naive cousins. While fewer than 30% of naive bilbies survived, 67% of cat-exposed bilbies made it through alive. Long-term survival still needs to be determined.

The cat-exposed bettongs also displayed some promising changes in behavior. During behavioral testing sessions, they were more likely to flee immediately (rather than pause) when exposed to a potential threat, which possibly indicates an improved ability to escape.

Researchers acknowledge that it might seem a bit cruel to intentionally introduce predators to these naive populations. But, Jolly says, “the alternative is that we have these enclosures forever. And that’s the only place that the animals live. I would like for there to be more than that. I would like to see these animals back in their native region without very close human intervention being required. And I believe that’s everyone’s long-term goal.”

Despite the promising early studies, Moseby says long-term experiments are needed, and this is very much still a work in progress. Arid Recovery has been doing controlled predator exposure for only a handful of years, and evolution isn’t something that happens overnight.

“I think it will take a lot of time,” she says. “We’ve shown improved survival in bilbies in the short term, but not necessarily in the longer term. You don’t know how long you have to do these experiments for to get the [long-term] survival benefit and to get heritable behaviors. It’s still very much in the experimental stage.”

But even if the process takes decades, Moseby says it’s still worthwhile.